Did you know 90% of your body originated in the stars?

February 8 marks the birthday of Dmitri Mendelejev (born Feb 8, 1834) – the father of the Periodic Table.

The formation of the elements began about 14 billion years ago in the early minutes of the Big Bang. After about 20 minutes, the ordinary matter in the Universe was a mixture hydrogen, helium, and electrons, which would start to be bound into atoms a few hundred thousand years later. From there, the periodic table of elements would emerge. In essence, the history of the formation of the elements can be divided into two main phases: one that ended after the first 20 minutes, and the other that has been ongoing since the formation of the first stars over 13 billion years ago.

The hydrogen in your body, present in every molecule of water, came from the Big Bang. The carbon in your body was made by nuclear fusion in the interior of stars, as was the oxygen. Much of the iron in your body was forged during supernova explosions that occurred long ago and far away. The gold in jewelry likely came from neutron stars collided and may have been visible as short-duration gamma-ray bursts or gravitational wave events. Elements like phosphorus and copper are present in our bodies in only small amounts but are essential to the functioning of all known life. 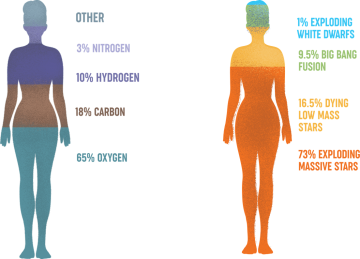 Explore more facts about the universe and the periodic table on Chandra’s website.